‘The More, The Better’: it’s not the case always… 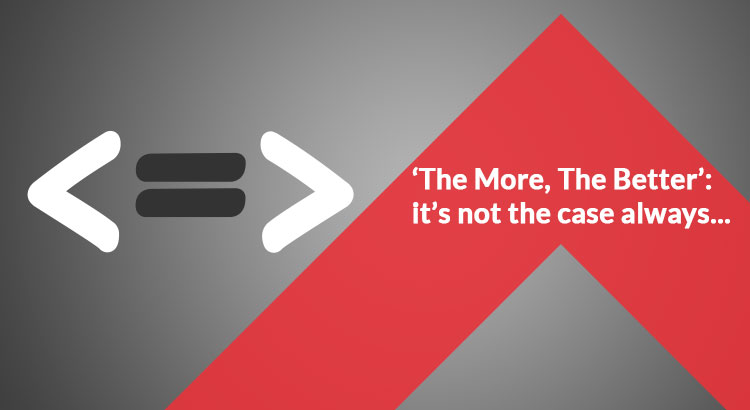 The power in numbers
Remember our school days, when we were taught in Mathematics, that if a particular task is completed by 5 people in 10 hours, then 10 people would complete the same task in 5 hours? The conventional adage suggests that the more number of people, the less number of time and energy taken to accomplish a particular task.

Similarly, from corporate perspective, any organization can come to a standstill without adequate manpower. In order to propel business volume or speed, the management very often banks on an efficient group of people to fulfill the objective. Sometimes, it requires to add more heads to attain strategic objectives. In a nutshell, the more number of efficient people, the more productivity and business revenue.

Is it always the same?
There is a say – “Too many cooks spoil the broth!”

Apparently, it is contradictory to the proverb we mentioned earlier. When too many people gather in a place to complete a single task, then there are high chances that the task might be spoiled. There can be several reasons behind the same:

The more number of people means more dependability on others instead of taking own responsibilities.

There are several instances where we find that a greater number of people, even if having enough efficiency, fail to accomplish a task. This happens when organizations fail to realize that a work which can be done by two people, should be assigned to two people only. More number of people might unnecessarily hinder the output.

Is ‘more the better’ idea relevant to Privileged Access security?
Enterprise IT ecosystem expands continuously due to increasing IT operations. Confidential information, personal data, databases, applications, among many other kinds of sensitive data keep on generating and accumulating.

Firstly, Privileged Identities that are typically created on ad-hoc basis, have a tendency for escalation. The higher number of privileged identities demand greater IT oversight, which in turn increases IT operational and security challenges.

Secondly, it has been observed that many times administrators fail to revoke privileged rights after completion of the task and eventually the number of privileged accounts keeps on increasing in the network. This indirectly creates a huge risk for an organization because there are chances that the unmonitored accounts could be misused by malicious insiders or even suspicious third party users with privileged rights. Malicious elements typically eye privileged credentials to steal confidential information.

To sum up, the conventional idea of the strength of more might not be always right when it comes to privileged access security. Less (number of privileged accounts) is better as far as IT security risks are concerned.