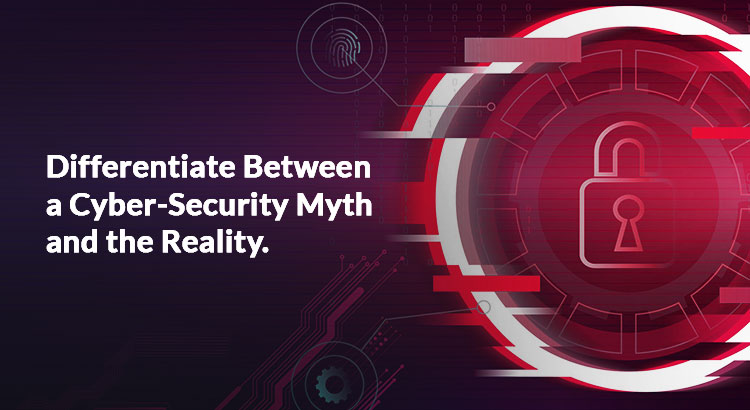 Alongside the intricate world of cybersecurity, the myths and misconceptions regarding the same are growing continually as well. As most people tend to ignore the details, they usually believe in these fallacies and end up prejudicing everything. Thus, in this write-up, we are going to bust a few myths.

Myth: Only the IT team of an organization is responsible for cybersecurity breaches.

Reality: It is, indeed, pretty accurate that the IT professionals of a company generally set up and implement a new cybersecurity infrastructure. However, it is almost impossible for them to stay on guard all the time and protect the network environment. A well-planned cyberattack can occur from almost anywhere at any time (around 1,470 breaches occurred in the year of 2019). So, in reality, almost anyone in the corporation can be responsible for cyber assault. Due to this reason, each and every employee needs to be wary before opening any e-mail from an unknown source. Furthermore, they should avoid clicking on unidentified links as well. Besides, the head of the organization will also need to use a User Behavior Analytics tool in their system. It, in turn, will help him or her to keep an eye on their employees and identify any suspicious behaviour.

Myth: A complete security of a network system is possible.

Reality: The continuous need to become accustomed to the new cyber-threats has always been a never-ending struggle for cybersecurity providers. There is no way you can completely secure your network. It will have at least one loophole, which might lead to cyberattacks. Hence, it becomes imperative to incorporate a strong backup system in the organization. This way, even if you end up losing some of your crucial data, you can always get them back without paying any ransom.

Myth: Using only a single Antivirus tool is adequate to prevent IT security breaches.

Reality: Most people usually think that using a single Antivirus software program is enough. However, due to enforcement of advanced IT technologies, new vulnerabilities are also arising. Hackers are finding new ways to exploit the vulnerabilities. To prevent these anomalies, we need to strengthen the IT security system. For example, identity and access management solution can prevent suspicious behaviour almost instantly. Besides, it helps to establish a proper password management.

Reality: Even today, some organizations still believe that the hackers will not target them, as they own a mid/ small-sized business. People even tend to point a few specific industries to be less-exposed to the cyber-threat. However, it is needless to say that they are absolutely wrong. According to a report, almost 43% of the cyberattacks are made on smaller businesses. While planning their attack, most cybercriminals tend to ignore the background of a company. They unleash the assault simply driven by the fact of acquiring some money or stealing data. For example, the retail sector is currently at a higher risk of being exposed to cyberattacks. As per reports, almost 59% of data breaches tend to occur in this industry only. Moreover, the healthcare industry has been under the influence of cyber-threat for quite some time. As per reports, around 9.7 million personal records were unearthed in this sector in the month of September 2020. But, it does not mean that the other sectors are safe. The hackers are quite active in the BFSI, hospitality, telecom, and IT industries too.

Myth: The cyber-threats are only carried out through the internet.

Reality: Most cyberattacks are, indeed, carried out through the web. Thus, many organizations think that disconnecting themselves from the internet will be an ideal solution. However, a brand new cyberattack gets unleashed almost every 39 seconds and not all of them are carried out through the internet. Let’s understand it through an example. If an employee brings an infected pen drive and plug it into the office PC, it can affect the whole IT infrastructure and unauthorized access is possible. The organization might lose a substantial amount of sensitive information due to this and might incur financial losses. Endpoint Privilege Management (EPM) can be an effective tool in this scenario.

The cybersecurity universe is ever-changing. Along with the security system, the pattern of cyberattacks are transforming everywhere. So, to prevent these sophisticated attacks efficiently, prediction of IT threats as per IT environment is very important. Believing in myths might hinder in technological progress!